Skip to content
> Uncategorized > Dispatches from the Front Lines

For the last several months, I have served as health and safety consultant for a series of outdoor corporate activations. They have been successful, in the sense that no one has gotten coronavirus. They have not, however, obediently followed our well-laid plans. This Adelman on Venues is my public debrief on the battle to safely create live events during a pandemic. Fasten your seatbelt – it’s been a bumpy ride.

The events are called “Rogue Routes,” happenings in interesting venues whose themes embody the five drive settings of Nissan’s new Rogue SUV. Nissan hired Atlas Obscura, a really cool adventure travel company, to select the locations and create the events with various production partners. Atlas Obscura, in turn, brought me in to help them navigate the coronavirus minefield.

At the beginning of September, we started casting about for areas in the United States that met Nissan’s artistic criteria and also had relatively good infection data. Even in this big country, many places did not meet our requirements for test positivity. I became conversant in infection statistics, state and local regulations, and terms like R0 (which I learned is pronounced “R naught”). After considering many locations, we settled on five favorites that looked safe enough and were available on the preferred dates. In early October, the dates were set.

Production and staffing arrangements moved ahead. I wrote a robust health and safety plan. Without giving away all my secrets (this is, after all, how I make my living), the plan required every worker and performer to get a PCR (polymerase chain reaction) test in their home city, do so long enough before the event so they had a Negative result in hand before they arrived on site, and then, in a belt-and-suspenders approach to this insidious pandemic, pass a rapid antibody test upon arrival on site. Then, once they had tested Negative twice, we strictly enforced face covering requirements, as well social distancing to the extent possible during production.

I led a COVID compliance training videoconference for all staff and production partners, both to underscore the written rules and to put a human face on their enforcement. For the video, I explained that we would apply the “Swiss Cheese model” of risk management, and I introduced my fabulous “Safety Monitor” fez. If one must enforce rules that many people would rather not have to think about, I believe it helps to wear a very bright fez.

On site, I was one of several people trained to administer antibody finger-prick tests. We were initially skeptical about doing this since none of us are doctors, but it turned out to be easy and painless. Only one person fainted out of about 150 tests, although I once got a bit lightheaded after my own test. Even in this politicized time, none of the crew or performers resisted getting our rapid test, which was great – ironically, only the EMTs absolutely refused to be tested. Since we still wanted EMTs on site in case of emergency, but we didn’t want them walking around without meeting our health and safety criteria, they agreed to spend the event sitting in their ambulance. Fortunately, we had no medical issues, so they left without ever setting foot on property. 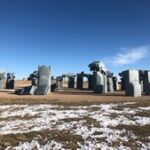 The fact that our health and safety plans were effective does not, however, mean that everything went smoothly. To the contrary, we were challenged by both new and old perils multiple times.

The scheduled headliner for our first event followed our plans to the letter. The band and crew all got PCR tests in Los Angeles before they started a week of rehearsal in anticipation of our first show, at Carhenge in western Nebraska. Everyone tested Negative, rehearsals went great, and they took rapid tests just before they boarded their bus before the long drive to our site. At that point, a sound engineer tested Positive. He tested again – Positive again. A third test was inconclusive. Given his role, everyone had been in “close contact” during the preceding few days, meaning that they all had to quarantine for 14 days to rule out their own infections. So we lost our headliner two days before the event, which was obviously a blow – but at least they did not infect their bus drivers or anyone on site in Nebraska. 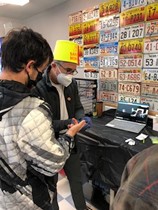 Everyone else showed up and was ready to perform. Fingers were pricked, the stage was set up, Rogues were positioned, and guests eager for live entertainment drove up in their own vehicles to watch the show. Then the wind picked up, as forecast by our private meteorological consultants. Then it started to sleet, which was not in our forecast. When the first artist’s keyboard and drums started to blow over in the cold sideways gusts, we had to call the show. For those keeping score at home, we beat coronavirus at Carhenge, but were ultimately defeated by the most mundane risk at any outdoor event, bad weather.

A few days later, our traveling circus moved to Pikes Peak International Raceway near Colorado Springs. New arrivals had to confirm a recent Negative PCR test, and all workers and performers had to get an antibody test on arrival. I spent more time pricking fingers while wearing my fez. For this second event, as infection data worsened throughout the United States, we further mitigated the risk by foregoing even the drive-in audience. This decision to go from livestream to recorded film shoot left only workers and artists on site and made logistics much easier, particularly since high winds were again forecast when we were scheduled to record. 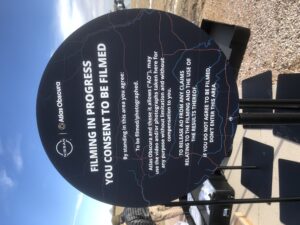 Only once was enforcement on site an issue. During our set-up day in Colorado, I had to ask a couple of workers to put on their face coverings, as opposed to having them around their necks. No big deal. But 15 minutes later, one of the guys was again not masked. I walked up to him in my bright yellow fez and asked to speak with him privately. I explained that I was not trying to be a jerk or prevent him from doing his job. But to protect himself and everyone else on site, as well as all the people we’d see when we returned home, he needed to follow the health and safety rules. To my surprise, he started to talk back. He began to tell me that most people who get coronavirus recover – I stopped him right there. I explained, in the firmest lawyerly tone I could muster while wearing a bucket on my head, that (1) more than 250,000 Americans had died already, (2) everyone else on site was wearing their mask, which was keeping him safe, (3) I was not at all interested in his bullshit excuse for not following my rule, and (4) if I had to tell him again, I would haul his ignorant ass off the site at a time when we should all be grateful for paid work. His boss then stepped in and took responsibility for ensuring that his young charge did as he was told.

Our plan was tested one other way. One of the production leads in both Nebraska and Colorado is an excellent guy fortunate enough to have been working another job before heading up to us. In between our two events, he learned that someone he had worked with on his previous gig had tested Positive. Our guy immediately scheduled a PCR test, but labs being what they are these days, he did not have his results before production began in Colorado. What to do? Fortunately, he volunteered to self-quarantine inside a van where he could watch his work being performed and communicate on radio so it got done correctly without exposing anyone. After one lonely day in the van, his test results came back Negative, and we were glad to welcome him back the next morning (after I gave him another rapid test, consistent with our procedure).

I flew home last Thursday. The show streamed on Sunday and I watched it from home. It looked great. No one got sick. I declare victory, so far.

We have two more events scheduled for December, in Oregon and California. Both states’ governors announced new restrictions last week, but we concluded after careful review that we can proceed. Once again, we’re going to be careful, and flexible. To paraphrase the line from 19th century Prussian general Helmuth von Moltke, ‘no plan survives contact with the enemy.’