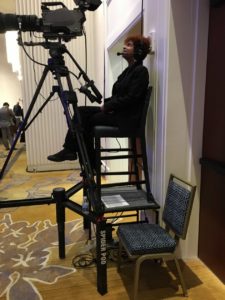 It is important to attach lofty principles to real people.  This is Selena.  I met her at a conference I attended last month.  She was hired to operate the video camera to record the presentations.

The conference was held in a very nice hotel in a major metropolitan area. Judging from number and size of meeting rooms, they do this sort of thing all the time. I would guess they are familiar with videographer requirements.

What could go wrong?

I stopped to chat with Selena the first morning, as attendees rushed out the doors to grab break food before it was taken away. I commented that her camera position seemed to be crammed into a narrow space between two exit doors from the main conference room. She explained that she could easily have set up her equipment closer to the stage, which would have avoided all the foot traffic, but only if the conference organizers would have killed a few seats in the last couple of rows. That obviously didn’t happen. 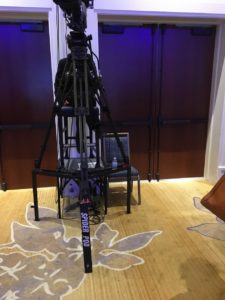 I then noticed that the legs of her camera tripod were not roped off to create separation from passing human legs. Selena cheerfully confirmed that several people had already kicked the tripod as they sped past her, which made for some choppy video, but otherwise didn’t seem like a big deal to her. I asked if someone couldn’t at least put high conspicuity tape on the floor around her position to increase attendees’ awareness of this trip hazard (and the pleasant young woman clinging to it). She thought that was a fine idea, but doubted it would happen that day.

When I hung my head to lament the sense of powerlessness Selena apparently felt to speak up for her own safety, I saw the platform on which she was sitting. It didn’t give her much room to move around – actually, none. Then I saw that someone figured they would reduce the risk of the camera operator falling off the too-small platform by using duct tape to fasten her chair to the platform. As I was about to comment on the creative battle between order and chaos, I realized that the chair next to her platform was put there intentionally so Selena could climb down.  I guess in the entire conference center, nothing with steps or a handrail was available.

As is often the case, even simple situations have layers of complexity. In this instance, my first reaction was that whoever had  MacGyver’ed this setup was a mad genius who I wanted to meet. I immediately put that thought out of my head and became angry at the hotel supervisor who approved it. That thought remains. But my final thought was for Selena herself. She recognized that she had been put in harm’s way, both by her location and by the eclectic combination of equipment she was given to use – but she didn’t feel like she could speak up or do anything about it. This made me feel worst of all.

Coincidentally, shortly after I returned from this conference, an industry peer sent me a comprehensive government report regarding various terrorism threats. I don’t doubt the authors’ good intentions – I think any effort to better understand and mitigate the risks of third party violence is worthwhile.  But I was disturbed by this line:

The solution to … terrorism is a coordinated organizational response, where police, fire and EMS personnel plan, train, and operate side-by-side.

Organizations certainly should work together. But notice who’s missing from this coordination – people like Selena, and everyone else who might want to know in advance what they might do during a terrorist incident. As I read the report, it seemed to suffer from the same sort of top-down, need-to-know mindset that so many people rightly find disempowering in other parts of their lives. (I’m getting on a plane tomorrow – I would happily forego yet another seatbelt demonstration in favor of showing us how the exit doors work.)

At least when it comes to protecting myself and the people immediately around me, I generally prefer to trust, but verify. I’m happy to leave big, complicated issues like terrorism to the experts in that field. For everything else, safety is a group exercise, not a spectator sport. Put another way, if more people decide that they can, and should, participate in their own wellbeing, that safety isn’t an issue only for “the authorities,” then people like Selena will know that they can point out the insanity of duct-taping a chair to a too-small platform set up between two exit doors.  Wouldn’t that be an improvement?

When I last saw Selena, she was climbing the chair-step up to her perch.  I don’t think she said anything to management.  She deserved better.  We all owe it to the people we care about to teach them that their safety matters enough to speak up for themselves.

In addition to inspiring this edition of Adelman on Venues, Selena and her predicament influenced me in a more constructive way that I hope you will soon see. At the Event Safety Alliance, we are creating a shiny new web site, and I am one of the drafters of new content. As we thought about ESA’s mission statement, we tried to not only say what we stand for, but also to use the letters E, S, and A. Here is what we came up with:

The Event Safety Alliance is a non-profit membership organization.

ESA‘s mission is to make event professionals and our guests:

Aware of the reasonably foreseeable risks around them.

ESA works to achieve our mission through:

In order to make safety the highest priority at live events, one must not only know what to do to stay safe, but also how to inspire others to work and live safely, and why safety matters at every phase of every event.

ESA‘s ultimate goal is a culture in our industry that puts life safety first. We hope you’ll join us.