Last week was particularly eventful in both Major League Baseball and the National Football League. For very different reasons, we get to think about what causes us to move from merely thinking about change to making the change itself. Let’s consider them one at a time.

1. Netting and the Risk of Getting Hit at the Ballpark

On September 20, 2017, a two-year old girl was hit in the face by a foul ball at Yankee Stadium. News accounts indicate that she was sitting up the third base line, beyond the dugout, roughly half a dozen rows back from the field.

Since the early indications are that the girl is doing okay, I don’t think it is too soon to consider how this incident happened, and why.

WHAT SHOULD TEAMS DO TO PROTECT THEIR FANS?

On one hand, every team has a legal duty of care to take reasonable steps to protect their fans from reasonably foreseeable risks. In this case, one might say that “reasonable steps” were determined by Major League Baseball, which issued guidelines after the 2015 season recommending that teams extend protective netting at least 70 feet to each side of home plate. Every club did at least that much.

Some people argue that netting should go further, and note that there is a variety of netting lengths among the 30 MLB clubs. As shown at right, even the two New York teams address their netting situations differently.

Clubs can also correctly point to the messaging throughout every ballpark warning fans to stay aware for objects coming off the field into the stands, as well as the disclaimer language on every (increasingly rare) printed ticket and team web site informing fans of the risks inherent in a game played by strong young men trying to hit hard balls with wooden bats.

On the other hand, what every club markets when it tries to sell tickets is the ballpark experience, as distinguished from just watching the game on a high-definition TV at home or in a bar. The more remote fans are from the action, the more even the ballpark experience starts to feel like watching from your living room (only more expensive, and with longer food and beverage lines). And as much as regional television rights may drive team economics, empty stands look bad whether you’re sitting in a too-quiet ballpark or watching at home.

The goal for every club is to find that sweet spot between keeping fans far enough from the field that they won’t get hurt, but not so far that they decide to simply watch from home. Applying this to netting, the right distance to protect, as I write nearly every month in these articles, is a function of context.

For as long as the A’s play at the venue now known as the Oakland Coliseum, for example, they can logically claim to need less netting than nearly anyone else. Its enormous amounts of foul territory around home plate mean that fans sit far from the action, and therefore have more reaction time to duck or raise their arms should a ball or bat fly in their direction. By contrast, more intimate ballparks, such as Fenway Park in Boston, expose their fans to both action and danger from up close.

Imagine how the conversation would go in a deposition, say, for the head of stadium operations:

Q. How much netting does a baseball stadium need?

A. As much as is necessary to keep a reasonably attentive fan from being unreasonably exposed to the danger of foul balls or shards of bat from hurting them. (This is the legally correct answer. But keep reading.)

Q. How many injuries are “acceptable” to you?

A. Well, we maintain data on fan injuries and most are very minor, with nearly all fans refusing medical treatment and staying to enjoy the rest of the game. (Also true for every club, right?)

Q. If the number of seriously hurt fans is more than zero, on what basis does the team determine how many injuries are okay before it decides to change something? And are all injuries the same for the purpose of this discussion, or does a bloody adult move the needle more or less than an injured two-year-old?

Presumably, if any team or stadium operator thinks a toddler shouldn’t sit where a ball could fly at her at 106 mph, they could have had a policy about that. Or at the very least, they could instruct their ushers to warn adult guardians of young children that they are responsible for protecting their young charges. Either might help, although neither would have been a guarantee of the girl’s safety in this instance.

Since we know that everyone has a duty to behave reasonably under their own circumstances, we cannot focus only on one side of the equation. We began with the ballpark’s duty of care — now let’s turn to fans’ duty to be reasonably attentive to their own safety.

HOW SHOULD REASONABLY ATTENTIVE FANS PROTECT THEMSELVES?

In law school, we learned that “bad facts make for bad law.” My concern about letting this latest incident determine ballclubs’ decision-making is that factually, it appears to be an outlier among ball and bat injury cases.

I think this incident grabbed headlines in significant part because it was a two-year-old girl who got hurt. Tragedies involving children, like this spring’s Manchester Arena bombing, pull at our heartstrings. Todd Frazier of the Yankees, who hit the foul ball, said “I have two kids under 3 years old and I thought of them.” What parent doesn’t think that?

Isn’t there another side to the parenting instinct, however, which is to protect your children from foreseeable danger? Harsh as it may be, the events of Wednesday’s game suggest that season ticket-holding grandfather’s decision to bring his granddaughter to his exposed seats up the third base line was not the best. Some advocates of extended netting argue that even attentive adults don’t have enough time to perceive and react to a screaming line drive. By this logic, notwithstanding all the warnings, the adult put the child in harm’s way.

THIS INCIDENT SEEMS TO MATTER, BUT FOR WHAT?

There should be a teachable moment from nearly any tragic incident, but some lessons are harder to tease out than others. Consider the options here.

Legally, the family is unlikely to have a claim against anyone because the “Baseball Rule” says that fans assume the risk of getting hit by foul balls during the game. Even though the rule is being whittled away for injuries that occur between innings or from objects like hot dogs tossed by team mascots, the rule is still good law when the ball is in play, and this case is squarely within its scope.

Child access is unlikely to change. Despite ticket and concession prices, baseball is meant to be family entertainment, and clubs will continue to attract fans of all ages to the best seats. It would be self-destructive to do otherwise. 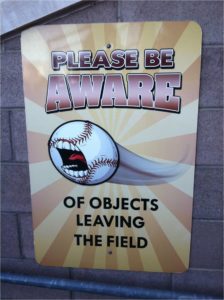 Add even more warning signs? Where? And what theory of human psychology suggests that the next sign will be more effective at getting fans to pay attention than the ones that are already up? And focusing on signage presumes that paying attention, and not proximity to the danger, is even the issue.

Which brings us back to netting. The first article I read juxtaposed the images of Yankee Stadium and Citi Field, implying that the Mets’ ballpark had a better set-up because it had more netting. Anecdotally, I suppose I’d agree, but I’d feel better if there was objective data itemizing the objects flying into the stands and resulting fan injuries.

So when an ABC News reporter asked me what I think clubs would do in response to this latest incident, I looked into my very cloudy crystal ball and said I didn’t think they would change as a direct response to this little girl’s fate. Wrong. Within a day, several clubs announced that they planned to extend their netting. I’m certainly fine with that decision, but I don’t know why this incident was the tipping point. If you do, please let me know. We all have a stake in making “reasonable” decisions, which means having a good reason for doing something. I’m just not sure the unfortunate injury of a two-year-old is that good reason.

Without data, clubs are simply left to respond to each incident, or not, based on the optics. Which may be enough to satisfy the court of public opinion — until the next incident.

2. Taking a Knee at Football Games

Let’s leave aside political opinions for the purpose of this discussion. I have one, you do, and so does every idiot with opposable thumbs and access to social media. Instead, let’s briefly consider what we actually know on this politically charged subject. That will allow us to behave like the thoughtful grown-ups that Adelman on Venues readers are.

1. Kneeling, locking arms, or staying in a locker room during the National Anthem is a form of “speech” which is unquestionably protected by the First Amendment to the U.S. Constitution.

2. The First Amendment protects people from having their right to “speak” curtailed only by the U.S. government, not by private organizations (e.g., you can limit speech in your own house).

3. Neither the National Football League or its member clubs are government agencies.

4. Most NFL player contracts, unlike those in Major League Baseball, for example, are not guaranteed.

5. Team owners who want to follow the President’s call to “fire” players who don’t stand when the Star Spangled Banner is played or sung could do so, largely without economic consequences. Doubtless the NFL Players Association would file a grievance, but in the near term the team would just have to find a replacement player.

6. Like most American traditions, playing the Star Spangled Banner has not always been this way. To the contrary, NFL teams stayed in their locker rooms during all pregame pageantry until as recently as 2009. If this is a litmus test of player patriotism, it is a very new one.

7. The President’s Twitter storm on Friday and Saturday yielded significant push-back not only from NFL players, almost 70% of whom are African-American, but also from some team owners and coaches.

8. The only opinion I’ll venture at this point is that I prefer teams staying entirely in their locker rooms rather than exposing some players to ostracism for expressing their beliefs on the sidelines. Kind of the “I’m Spartacus” approach to team behavior.

That’s the set-up. Again, my crystal ball sucks, so I have no prediction how this will unfold. But we are living through a very interesting decision-making moment. In the battle between a President waving the banner of patriotism and the National Football League, which enjoys fan allegiance that is arguably as deep and as strong, who will prevail?

Who, in your opinion, should prevail? And, in the ultimate question to any reasonable person, why?