I don’t think many of you would disagree that these are pretty terrible times. That goes for everyone, not just people who make our living from live entertainment and sports events and corporate activations and weddings and meetings and parties, all of which were the first to be shut down by COVID-19 and which will be the last to reopen.

In recent weeks, as if we did not already have enough going on that sucks, in addition to the health concerns any rational person would have as the United States pushed well past 100,000 dead and worries about the resulting economic devastation, the scourge of systemic racism has become such an urgent problem that no compassionate person could ignore it. After drafting the Event Safety Alliance’s statement in support of Black Lives Matter, I decided to go quiet until I could refocus on something positive rather than just adding another scream into the void.

Fortunately, I am an optimist. My current favorite movie is The Martian, a shockingly lighthearted adventure in which Matt Damon’s astronaut character is left behind on Mars when his crewmates mistakenly believe he has been killed in an accident. Somehow, he has to survive on a barren planet for several years until he can be rescued. In a film with many great lines about self-reliance, here is one of the best:

At some point, everything’s gonna go south on you and you’re going to say, this is it. This is how I end. Now you can either accept that, or you can get to work. That’s all it is. You just begin. You do the math. You solve one problem and you solve the next one, and then the next. And if you solve enough problems, you get to come home.

That’s how I feel these days. Since we released the Event Safety Alliance Reopening Guide a month ago, I have been giving webinars literally every day, answering legal and risk management questions related to reopening during this pandemic. The many Q&A sessions have revealed some frequently asked questions that I felt particularly qualified to answer. So I have.

For your educational uplift, I am attaching links to three videos I have recorded so far, in which I explain key legal issues and how they apply to professionals who are working to reopen. I called the first two “Ask Steve” until I noticed that talk show host Steve Harvey has clips under the same name. So I called the third video “Ask Steve Adelman.” Got to be careful.

Episode 1: Trespass. When states were just starting to allow venues to reopen, a pressing issue was what professionals could do if patrons refused to comply with social distancing or face covering requirements. In states such as Arizona, we are already seeing the negative consequences of widespread noncompliance, so enforcing health and safety rules is more important than ever. Happily, the law of trespass definitely helps.

Episode 2: Liability. Many professionals are understandably worried that people who get sick after attending an event will try to sue for their damages. So I walk you through a lesson on the four elements of a tort, why it will be virtually impossible for anyone to prove they contracted COVID-19 at your venue as opposed to the many other places they likely went during the two-week incubation period, and why liability is not the thing you should be worried about. This is a pretty comprehensive summary of an entire year of my legal education, applied to the circumstances you care about now. You’re welcome.

Episode 3: Waivers of Liability. I suppose it is a sign of event professionals’ growing comfort with the idea of reopening during a pandemic that the many recent conversations have focused on how to get patrons not to sue once they start to return. Waivers of liability are so common that people logically assume that they must have some value, and they do. It’s just not what you think. In this episode, I put waivers in their context as “adhesion contracts” in order to explain their modest legal effect, before I suggest a more reasonable way to treat your patrons under these circumstances.

I suspect I will record more of these, so if there is a topic you would like me to address, let me know. 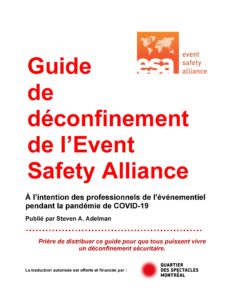 I have been gratified by the response to the Reopening Guide since ESA released it on May 11. We have received positive feedback from around the world, and I confess to more than a little pride that not only was our work one of the first to come out, but it still contains more operational detail than anything else I have seen.

Now we are working on several supplements more suited to the events and venues that will hopefully be able to reopen while we wait for a vaccine or a cure. We are aiming for mid-July. In the meantime, the Reopening Guide is being translated into a variety of languages, including French, Chinese, Japanese, Korean, Polish, and Greek. I can’t read most of them, but the covers look cool.

* * *
I conclude with another Mark Watney quote from The Martian:

Every human being has a basic instinct: to help each other out. If a hiker gets lost in the mountains, people will coordinate a search. If a train crashes, people will line up to give blood. If an earthquake levels a city, people all over the world will send emergency supplies. This is so fundamentally human that it’s found in every culture without exception. Yes, there are assholes who just don’t care, but they’re massively outnumbered by the people who do.

Thanks for being among the people who care. Let’s continue working our problems together so that one day, we will all get to come home. Steve Adelman